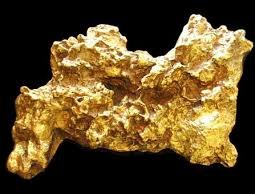 "There is Gold in that hills" was the cry in 1868 when Robert Gilchrist discovered Gold at Kildonan.

Six month after that find of Gold at Kildonan, 600 prospectors had made the journey.

The railway went only as far as Golspie, 30 miles short of their destination.

Gold Fever driving them on, the last 30 Miles had to be travelled on foot.

(Place Of Gold) on the Kildonan Burn!

In June 1869, a drought led to prospectors being able to plunder the riverbed gravel, and the price of Gold, which at  its height had been 4.5o£ an ounce, dropped to 3.5o£.

This, and coastal employment during the herring season, meant that by september

At midnight on 30th December 1869, all Gold-Licences expired by decree of the

Duke of Sutherland. It was all over.

The two year long Gold Rush had seen 12.ooo£ worth of Gold picked up from the rivers round the Helmsdale area. 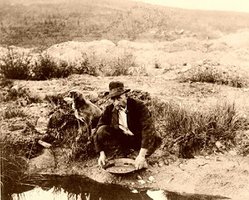 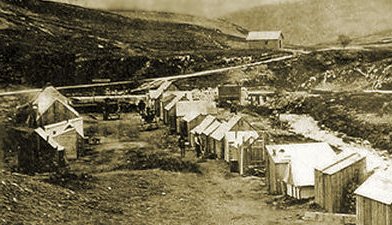 The gravels and sediments of the Kildonan Burn are salted with small concentrations of gold in the form of tiny granular flecks, and the very occasional little nuggets sometimes combined with quartz.

Visitors are invited to try their hand and spend an enjoyable day in the countryside panning for gold at Baile-An-Or. .

Gold panning is restricted to the areas between the upside of the stone bridge and the ford crossing , follow the hill vehicle track which leaves the car parking area climbing the knoll to the rear and follow it out along the flat plateau, this turns to the left and crosses the burn. Pan anywhere from this crossing back to the upside of the stone bridge, avoiding the waterfall at the end of the flat sandstone slabs. Equipment for mineral separation is strictly limited to gold pan, riddle, spade and trowel. The use of a gravel sucker is also permissable. Digging must be kept to the centre and sides of the burn, to avoid under mining of the banks. Any holes must be backfilled for the safety of other users. Young children and the elderly might find it easier to pan the area surrounding the car park. 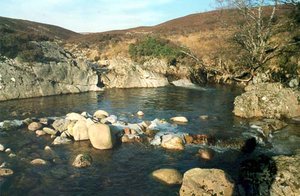 We offer a 5 hour Gold-Panning-Course during the summer months.

We provide the complete equipment and we

guarantee a small find of Gold.